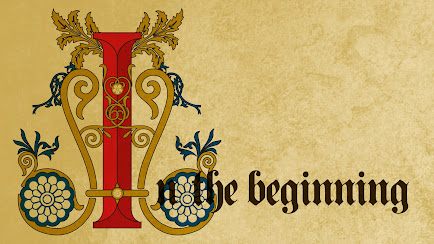 Our Gospel for Christmas Day is known as “John’s Prologue.  It is not only a beautiful passage, it is an unmistakable confession of Jesus: both as God, and as man; both the Son of God, and the Son of Mary; both human and divine.  It is a confession of Jesus as God, but distinct from the Father.  And it confesses His mission to save us poor, miserable sinners, and the fact that He saves us by grace.  It’s all packed in there, dear friends!

This one passage from the Bible is a summary of many doctrines about Christ, and yet this passage is not academic theology, but rather living, breathing, grace-bearing, potent words that comfort us, deliver hope to us, and instill in us a living and saving faith.

Centuries ago, the Church recognized the power of John’s Prologue, and for centuries, this passage was read by the pastor at the conclusion of every Divine Service.  It was known as “the second Gospel.”

This passage is abominable to Satan.  For it exposes all of his lies to detract people from who Jesus is.  For nearly every major heresy in the history of the Christian Church has had to deny something that St. John wrote here in his little introduction to His Gospel.

On one occasion, I was interviewed by a European reporter.  She asked me what my favorite Bible verse was.  I explained that I don’t have a specific verse, but John’s Prologue is the passage of the Scriptures that I think are the most comforting and sublime words ever written, and that John’s inspired words sum up the ministry of Jesus and what being a Christian is all about.

She did not report on this in her terrible article – filled not only with inaccuracies, but outright lies.  She reported her favorite verse, which she twisted out of context to support her belief in Socialism.  Of course, Satan is the father of lies, and Satan much prefers the false Gospel of Marx than the true Gospel of Jesus Christ – especially this pure confession of who He is.

We often find ourselves as Christians making the case that Jesus “is the reason for the season.”  And so He is.  But the world has grown so ignorant of who Christ is that we now must explain the reason for Jesus.  Our Lord did not come to institute Socialist economics or woke culture.  His mission is not to scold us into being nice, or to instruct us into being “good people.”

His mission is to save us from our enemies: from sin, death, and the devil, and even when our enemy is ourselves.  Jesus is the Word, who was with God “in the beginning.”  But He was not only with God, He was God.  And through Him, through the Word of God, “all things were made.”  Jesus is the eternal God, the Creator, the very mind and language of God, to whom we owe our being and the existence of the universe.

And of course, even unbelievers understand that the world is not as it should be.  They have all sorts of ideas how to fix it, and these ideas never work, but only make things worse.  We live in the darkness of sin and the crushing burden of our mortality.  But Jesus breaks into our darkness.  For “in Him was life, and the life was the light of men. The light shines in the darkness, and the darkness has not overcome it.”  Jesus illuminates us out of sin’s darkness, and He revivifies us, and gives us life in the midst of death.

Jesus came to us in the darkness.  He came first to His own family and nation.  As John testifies: “the true light, which gives light to everyone, was coming into the world.  He was in the world, and the world was made through Him, yet the world did not know Him.  He came to His own, and His own people did not receive Him.”

Of course, the rejection of Jesus resulted in His passion, His crucifixion, and His death.  For this is how Satan and the world deal with light: to try to extinguish it.  They deal with life by trying to kill it.  They deal with the truth by responding with lies and deception.  And, of course, our Lord used Satan’s own means to destroy him.  For our Lord’s death on the cross was not a defeat, but a victory.  It was the reason the “Word became flesh and dwelt among us.”  He was born and laid in the manger so that He would die on the cross.  For in that act of love, that moment of His death, He declared “It is finished!” – and Satan and His demons, sin, and death, were all destroyed by the Word that was with God and the Word that was God.

And this is the true message of Christmas.  It is the message of salvation, of rescue, of the defeat of all of the things that oppose us.  Jesus, “for us men and for our salvation… came down from heaven, and was incarnate by the Holy Spirit of the virgin Mary, and was made man.”

And was made man!  This is the joyful mystery, dear friends.  This is why we celebrate this great and wondrous day.  God became man, the Word became flesh, in order to dispel the darkness, and to restore life to our flesh that was dead in sin.  He came into our world in order to defeat death by dying, and to rise, so that we too shall rise.

This is why in the confession of the Creed, the clergy traditionally kneel at the words “And was made man.”  In fact, the custom is not only for the clergy, but for all Christians gathered together to drop to one knee out of reverence for this great and joyful mystery that “the Word became flesh and dwelt among us.”

And He has not come bearing the Law.  Rather the Law comes to point us to Him.  For Jesus comes to bring us the Gospel of forgiveness, life, and salvation, as John confesses: “For the law was given through Moses; grace and truth came through Jesus Christ.”

May His grace and truth, this light in the present darkness, this life who has come to our world of death, may Jesus bring you comfort, joy, courage, and a true understanding of who He is, and who we are as Christians, dear friends.  No matter what happens in this life, our Lord has come “full of grace and truth” in order to deliver to us “grace upon grace.”  Jesus is the reason for the season, and salvation is the reason for the Word taking flesh and dwelling among us.  The light dispels the darkness.  The truth stamps out the lie.  Life overcomes death.  Merry Christmas, dear friends.  Merry Christmas.

In the name of the Father and of the + Son and of the Holy Spirit.  Amen.

Intelligent comments from ladies and gentlemen are always welcome! Because of spam, comments are moderated - please be patient!